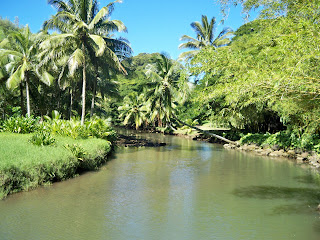 My final day in Kaua'i, and I was lucky enough again to have Barbara and David as my personal guides for one last time.

Today it was to the Botanical Gardens (on what is known as the Garden Island) one of only five in the USA. Hawaii is known as the world centre for endangered species; this is in some part down to human invasions of habitat, but in the main thanks to the introduction of non-native species that tend to be much more hardy than their delicate Island counterparts, and out-compete them to extinction. The first thing I encountered in the gardens when I arrived was the head gardener removing two very rare specimens that had succumbed to disease. Very sad.

I was shown the tasteless mint and the brambleless raspberries, as mentioned the other day, as well as stinging nettles who no longer need their stings. There was also a project sponsored by Bette Midler (which helps in some way to finance the much under-budgeted Botanical Garden) a Hibiscus Clayii which was sent to Kew Gardens 100 years ago, went extinct on the island and whose descendent was subsequently sent back from England, and the vinblastine plant that is used to treat childhood leukemia.

Following the tour of the nursery, there was enough time for a walk around the private gardens, (above), all the way to the beach, and for a look at the o'o'pu fish that have suckers on their bellies that they use to climb up waterfalls, before we were back for lunch – with some delicious coffee as grown at David's coffee plantation. It was then, with much sadness, that I had to say goodbye to my guides and head back towards the airport.

I had an hour or so to kill before the flight, and so looked into the Museum of Kaua'i, which was an unexpected treat, containing at some real nuggets of information that may well be useful for the show. It's a bit unsavoury, but I never knew about the Ni'aupi'o system of ancient Hawaii where family members committed incest to preserve their royal genes. The result of these nuptials obviously were often very sick or stillborn, but if a child was healthy it became incredibly holy, so much so that everyone had to bow down in their presence. This became such a problem that they would only travel during the night, when no-one could see them. How bizarre.

Anyway, from there it was back to the airport for the 30 minute flight back to Oahu, and for my final day in Hawaii, back in Waikiki.