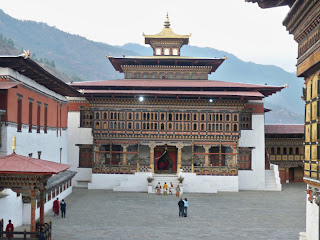 It's almost impossible to enter the Kingdom of Bhutan unless you're on an official tour, and when on the tour you need to spend a minimum amount of money per day. So it's expensive. That said, it's somewhere that I've wanted to visit for a long time and how often am I going to be in the area? The country is also in the H-for-Himalayas and eschews Gross National Product in favour of it's own measurement of "Gross National Happiness" so I felt it was perfect for H-research and made the booking; my last act before leaving on my trip. I'm so glad that I did.

I printed out my visa and flight ticket this morning at my Kathmandu hostel. The flight was to leave at 1:50pm so I had plenty of time for a leisurely breakfast and to buy some currency. In the end, I took a little too long and was rushing to get to the airport, arriving at around midday only to see a very empty Druk-Air desk (Druk Air is the national airline of Bhutan, it gets it's name from the Bhutanese for "dragon"). Erm. I looked at the printout again - the flight leaves at 12:45?? What?? They'd changed the time of the flight and not told me. And now the check-in had closed. "Flipping Heck," I didn't say, as I searched desperately for someone to help. In the end the staff were remarkably helpful, two workers from another airline ran off somewhere to find a Druk Air official, who rushed me through to the departure gate. I was there just in the nick of time.

The departure gate was busier than I had thought, but I joined the queue. Only to notice that after a few seconds, my fellow passengers were being ushered away from the gate. The 'plane wasn't ready was the mutter of the line, so I sat back down. Thinking that things were getting a bit tight I spoke to a member of staff who looked at me horrified; the plane had already boarded and the other passengers were for the next flight to Mumbai. Again, I didn't say "flipping heck" and again I was helped by some brilliant staff members who rushed me to my seat. I was finally on the 'plane. Phew.

The 'plane sat on the tarmac for a good 25 minutes before taking off. The pilot blamed poor visibility, but I fancied that it was likely down to my useless timekeeping, but it was well worth the wait. The flight skirted the Himalayan range so that we could see Everest and many other famous mountains - truly breathtaking. The flight then began its descent after only half an hour, swooping down to the right into a valley to Paro. It was an enormously memorable flight. And so I was in Bhutan. 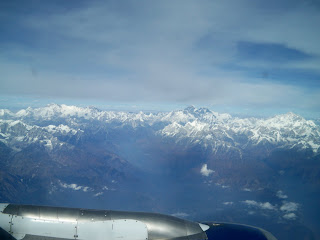 The first thing that I did once I'd cleared passport control was to smack my head into the extremely low door of the toilet in the airport. I was later told that in Bhutanese Buddhist temples the doors are often low to stop skeletons or other undead creatures from entering (apparently they can't bend down) - I'm not sure that the same logic applies to the restrooms though.

I collected my rucksack and met my guides for the next few days, Sangay and Nangay who drove me the 40 miles or so from Paro airport to the Bhutan capital of Thimphu. The roads were good, the drive was brilliantly calm (after the madness of Kathmandu) and the entire country just felt conducive to pure relaxation. Thimphu itself is something like Andorra la Vella, or perhaps a Swiss Village: it is in a valley with the houses build up the mountains and with a beautifully clear river running through the centre. 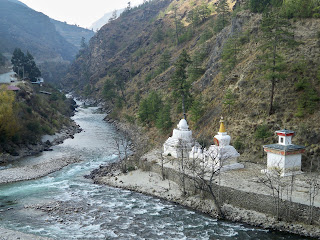 I checked into my hotel (the second-poshest of the entire trip so far) and was then taken to one of the main temples of the capital. It is in part the office of the King of Bhutan and in part the home of Thimphu's buddhist monks. The complex is enormous and enormously impressive. Sangay talked me through the various tenets of Bhutan society and the intricacies of Buddhist life - I learned a lot - and this was only the first couple of hours in the country.

I have included three pictures: firstly one of the temples inside the Thimphu fortress, secondly from the aeroplane window (Everest is there somewhere but really it is the range as a whole that is particularly impressive) and finally the site of the meeting of the Paro & Thimphu rivers. Now it seems I may be going to a karaoke bar. Very random indeed.