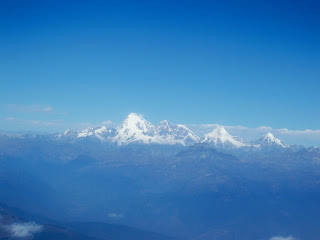 Leaving Bhutan today. What a shame. As we exit the hotel, Samgay my tour guide and new friend implores me to stay for a while longer. At a minimum of £200 a day it's not really an option, but I promise to return one day. We just about have enough time before my 11am flight to check out the National Museum of Bhutan.

Samgay and Namgay looked a little worse for wear this morning; usually they are waiting for me to get myself together before we set out on a trip, but today it is me who has a little time in the hotel lobby - when they left me at around 10pm last night they were heading back into town, so I wasn't exactly surprised.

We were at the museum just after 9am - the only people there and the curators hadn't even bothered to open up yet. After a couple of minutes stood outside the circular building that overlooks the town of Paro we were finally allowed in, only to be greeted by four screaming monks running up the stairs - apparently they had found a mouse in one of the display rooms.

The museum has a set path that one must take - as most of the items are Buddhist artefacts it's in a strictly clockwise fashion. There are hundreds of Thankas (Buddhist Paintings), statues and urns at every turn (and about half way round a caged mouse) - but sadly time was very tight, towards the end we were fairly running round. Once I'd got back to the car we flew through the Bhutenese roads for me to arrive at the airport just in time for my flight.

The DrukAir 'plane takes off from Paro airport and banks sharply to the left to avoid crashing into a mountain, it then banks sharply to the right to avoid a second, and within 15 minutes anyone sat in a right hand side seat has a fantastic view of the Himalayas. (see above) I arrived back in Kathmandu Airport, and by the time I'd experienced an odd reception of a dancing yak and yeti (and been hasseled by taxi drivers) the serenity of Bhutan seemed a million miles away. Nothing for it but to immerse myself back into the Kathmandu life and so I decided to walk the mile or so through the crazy streets to buy some bus tickets to the city of Pokhara which I intend to visit later in the week. I got to the bus station which is really one of the most tumltuous places I've ever known: but no offices. I asked around and was given a tourist map - turns out the offices are about a mile away from the station, and about a hundred yards from my hotel! Still, good to wander around lost, nothing gives you a better impression of a city.

Tonight I attended a quiz run by the Umbrella Foundation. http://www.umbrellanepal.org/ They do these every week and it pays for their many volunteers to look after orphaned and displaced kids in the country. A good cause and a good quiz (thanks to the fact that me and the Kiwi couple that I joined won it!). Tomorrow I will visit the National Museum of Nepal as well as the Natural History Museum - I wonder if they'll have any mice...
Posted by eggshaped at 01:43