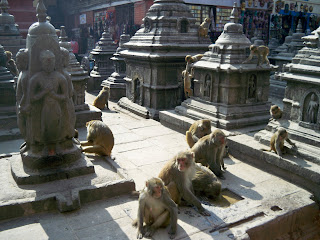 Feeling a little better, and a more than a little braver, I went for the Nepali breakfast this morning. A bowl of fruit followed by a spicy pea and potato curry along with a couple of pocket-style pancakes to dip into the sauce. You might think that curry for breakfast isn't ideal, but actually it really hit the spot, so I was full of beans by mid morning when I decided to approach the hotel's tourism dask to see what they could offer me for the day. They suggested that I take one of the taxis that were sitting outside the hostel and hire him for the day. At 2000 rupees (around £16), it seemed like a decent idea, but I was warned that they were not allowed to act as guides. It seems that they refuse to do so in case they might take work away from the guides themselves, but what I didn't realise was that this meant my driver would be almost completely silent. Maybe he was just the quiet type.

Anyway, the first drop-off was the monkey temple at Swayambhunath. I paid my entry fee and wandered into the area where there are dozens of temples, all in current use by local Buddhist. And hundreds of monkeys. And dozens of dogs. And thousands of pigeons. I had a wander around, taking some photos and decided to take some videos of the monkeys using the temples as a playground. Damn. I hadn't charged the video camera, and only had 7 minutes of batttery left. I kept shooting, a minute at a time, but they just wouldn't give me the shot I needed, until the very last minute of juice. It was almost as if they knew it was my last chance. A couple of minutes later I heard a scream from behind me; turning quickly, I just about caught sight of a monkey stealing a bag from a couple of female tourists. It took a couple of stewards with long sticks and a rather agile man climbing a good 10 feet up the temple to retrieve (most of) their possessions.

I found a quiet spot and decided to do a little reading. While I'm traveling around, I am reading plenty of books, this one was perhaps more mainstream than usual, being Michael Palin's book on the Himalayas. I'm a pretty quick reader (as QI elves have to be) and was concentrating hard when I sensed the presence of somebody beside me. Looking up, the old man to my left smiled and bowed. I smiled back. It turned out he was called Isu, and he was very interested in my book. He asked me to read to him. Err, Ok, no harm in that, I guess, so I began to read aloud. All was going fine until I uttered the sentence “gray marble statue” which Isu seemed to take delight in. He began to shout each syllable in a gruff, almost angry voice. This was strange. Nonetheless, I continued to read, and got a couple of paragraphs down the page before Isu put his head on my shoulder. I was now totally freaked out. I smiled, said goodbye, and left. Sharpish.

Next stop was Patan, the next city to Kathmandu, and known as the city of fine arts. I was shown around the temples by a guide who pointed out the temple of 9,999 buddhas and the temple where huge bull sacrifices take place – the door is adorned with the animals' intestines. Lovely.

Next was another monkey temple at Pashupatinath. This one was much quieter than the last. While there, I saw the cremation of many of the area's dead which was something of a sight – pyres set up at the side of the river – and also the rather surprising sport of local teenagers who taunted the holy monkeys by chasing them with sticks and stoning them with large rocks. With time running out, I got to one final site: Boudhanath. The story behind this temple is that an old lady asked the Nepali King for land to worship Buddha; he agreed saying that she could have as much land as she could cover with a buffalo skin – but being a wily old lady, she cut it into really thin strips and created a circle with a huge circumference. Today the circle is filled with a great big temple decorated with a huge pair of eyes. The idea at this, and other Buddhist “stupa” sites, is that you walk all the way around the monument spinning the prayer wheels as you go. By doing this, you can have one sin expunged. As such, the temple is home to the odd sight of many hundred people walking around in a huge circle – think about a giant roller-disco without the rolling or the disco and you're not far off.

So I'd seen the most important sights of Kathmandu, and all in one day. Quite exhausting really, but there was not a second to lose, what with me leaving to Bhutan in the morning. I'm unsure how much connectivity I will have for the next week, so please bear with me on the blog front.