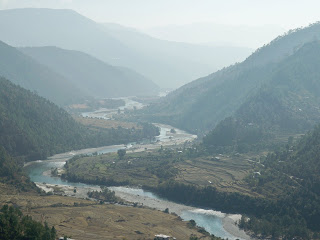 Buddhist temples in Bhutan are, without exception, buildings of great beauty, colour and significance. The only problem is that there are so many – the line goes that there are more temples than houses and more gods than people – that you can become a little bit desensitized. This morning it was a 30 minute trek to the Khamsum Yulley Namgyal which is notable for its incredible view of the Pokhara valley (above) as well as being built by Her Majesty the Queen Mother really rather recently. The hike took me over the rushing river and through the fallow rice fields to a four-story temple that, although modern, would not look out of place in a 17th century fortress. In fact, I sometimes wonder if this is one real problem with the religion – all of the religious iconography is identical, and Buddhist symbols are pretty much all you see, from temples to restaurants. I wonder if, because great artists are appropriated by the religious leaders, this has stifled centuries of art in the region.

Anyway. After a long walk it was time for a long drive. We headed on the 100 mile drive to Paro which, when your average speed is usually around 30 km/hr, is something of a journey. Two sights were notable: a royal cavalcade including one of the the fourth king's wives (he married four sisters – Bhutanese men are allowed to marry multiple women, so long as they can afford them – they can have up to 3 marriage licenses, but each license can carry as many female names as you like) and a leopard cub that bounced across the road and up a siding before I could even find my camera in my bag, let alone get it out.

When we arrived in Paro, it was late afternoon. Samgay, apologising that the museum was closed, took me to see an archery competition. As I mentioned a few days ago, archery is the national sport of Bhutan: it has failed to dominate Olympic medals thanks only to the country's small population and the fact that Bhutanese archery takes place over distances three times longer than international competition. Like the darts, the game takes place between two teams, each player having two arrows. The teams take it in turns to fire all of their arrows at the opposing team's target (which is surprisingly small, considering the distance) while their opponents yell insults. The arrows fly with awesome speed, but thankfully my vantage point – while very close to the target – was behind a wooden wall. 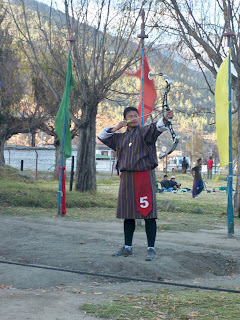 And so it was back to my hotel. It had been a busy few days so I took my dinner (incidentally, Bhutanese food, with the exception of their chili cheese, is pretty awful) in my room and prepared for tomorrow – a visit to the world famous Bhutanese Tiger's Nest.
Posted by eggshaped at 09:38