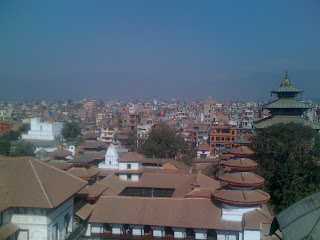 I remember my time in Hawaii with great fondness, especially being woken up at 4am by crowing cockerels – at least I did when I was woken at 6am this morning by half an hour of somebody clearing their throat in the adjoining room. It was a display to put most Premiership footballers to shame and when I finally left the room I half expected to find his vocal chords on the floor outside his door. With such a rude awakening I wasn't really in the mood for breakfast, but knew that I should eat so ordered a breakfast burrito. What came was an odd infusion of British, Mexican and Indian cuisine with curried beans and scrambled eggs in a tortilla – it shouldn't really work, and quite frankly it didn't, but I forced it down and headed out into the madness of Kathmandu again.

It was cold. Not uk snow cold (it has only snowed once in Kathmandu in the last 62 years), but cold enough that I decided a brisk walk to the museums was in order. First up was the former royal palace, it's an impressive building beside one of the busiest interchanges in Kathmandu and has only been open for a few months. When it first opened to the public it wasn't quite ready – lots of the rooms were not cordened off - which apparently led to many of the locals entering the former king's bedroom and bouncing on his bed.

From there I went back to Durbar Square where I had spent my first full day in Kathmandu, indeed the guy who showed me around all those days ago collared me almost before I realised where I was. He told me with great zeal that the message I had written in his book last week (complete with a little QI logo) had been a hit with a number of British tourists who knew the show and had subsequently agreed to mini tours with him. I thought he was extremely knowledgeable, so hopefully his other customers felt the same. In Durbar Square is another former palace; it is decked out with many of King Tribhuwan's personal items – for instance his dictionary and his favourite bird-cage complete with his favourite bird, stuffed. The building also has a nine-storied tower which you can climb to get a great view of the city (above).

Next was the National Museum which is a couple of miles south-west of the Square. Feeling confident, I worked out my bearings and set off in that general direction only to be confronted by a huge number of protestors and almost as many riot police. “If you meet riot police on your journey – get the hell out of there, before it gets hairy” - if that's not a travellers' maxim then it should be. The protestors are Maoists who are currently claiming territories in the North of the Country as their own independent states – some of their supporters were attacked and killed last week, so they have organised a number of rallies and strikes. I rallied myself and struck out in the exact opposite direction.

So after something of a diversion, and with the temperature on the rise, I finally arrived at the museum absolutely exhausted. Outside the front of the building was a small shack selling drinks and snacks, so I ordered a coke while a bunch of teenagers used me as sport as well as, I guess, to test out their english. “We like your hair” they shouted without a trace of irony (though I'm sure it was there somewhere), and when I realised I couldn't take the bottle away from the shack and downed it there and then I received a huge ovation – only bettered when the inevitable belch followed. Nothing like bodily functions to span a culture barrier.

The National Museum was fairly interesting, with many many buddhist artifacts, a collection of dolls from around the world and more stamps than you could shake an enormous envelope at. More interesting though was the Nepalese Army Museum over the road that had the country's first rolls royce and a huge amount of information about the Gurkhas. And so, speaking of non-Englishmen who represented Britain, on the way back I managed to find somewhere that was showing the England cricket match – bonus. Can't let the fact I'm in a bar get to me too much though; early start in the morning as I get a bus to Nepal's second city - the resort of Pokhara.
Posted by eggshaped at 07:35