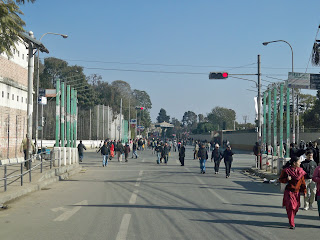 There was supposed to be a strike on my first day in Kathmandu all those days ago, but it was cancelled at the last minute. I had hopes that the same would happen today, but as soon as I walked out of the hostel this morning it was 100% certain that this was not the case. The gates of the hostel were closed and there was high security watching people go in and out, all of the hustle and bustle of the shops outside the door was replaced with closed shutters, and more strikingly the honking of taxis, rickshaws, motorbikes and buses was completely absent. With no cars, everything closed, and people wandering around aimlessly, it was like something out of Dawn of the Dead. The above picture shows one of the busiest interchanges in Kathmandu, normally this would be chaos, with thousands of vehicles passing through every hour and a policeman standing in the centre attempting to keep some kind of order, but today you could actually walk down the middle of the road with impunity – in fact, I have only seen three cars in the whole day, and two of those were ambulances.

There are armed guards everywhere and you can't even get food or drinks; the only commerce that is taking place at all is by the odd enterprising individual who will approach you with his goods in his coat or suchlike, another beckoned me into his shop that seemed closed but still had a small opening in the shutters. And it's not surprising they're so secretive: feelings are running high in Nepal and a bus that experienced mechanical problems last night and so was rushing home in the early hours of this morning was set alight by people angry that they were breaking the strike – in fairness the demonstrators made sure everyone was out of the bus first!

So it's all a bit strange. Not dangerous or scary in any way – there may be protests, but if there are, they're nowhere near the tourist areas – it's just very eerie. Add to that the fact that at the usual 6pm time, the electricity has just gone off, and it has been a really rather anticlimactic end to the trip. If things change then I will try to get something done tomorrow before I leave and blog again, but if not then thanks very much for reading over the last 40 days or so, and I hope you've enjoyed reading about my travels – here's to Ireland, Iceland, Ivory Coast, Italy, India, Indonesia, and, err, Iran & Iraq, next year.