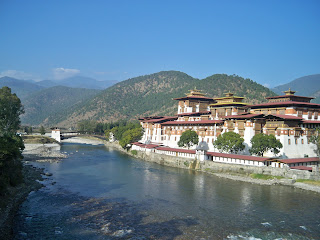 One of Bhutan's national dishes – probably the favourite of most of the male population at least – is chili cheese. It's basically whole cooked chilis in a cheesy sauce, and boy is it hot. The Bhutanese feel that any dish without a huge splash of chili is virtually tasteless, regardless of other ingredients, but I'm sorry to say my stomach does not agree with their policy. I had something of an uncomfortable night and so was pretty tired as we set off this morning.

I had spent almost all of my local currency yesterday on the golf course and there are no ATMs in Bhutan that accept international cards, but thanks to my tour operators in the UK, I was able to wire some cash over. It was a bit of a crisis at one stage, but after a quick trip to the company's local offices, I finally had some cash... though in actual fact, by the time I'd visited a couple of book stores and the country's most famous paper-making factory I was already looking with concern into my wallet!!

So after a little souvenir hunting, we set off on the drive to the town of Punakha (pronounced poo-knacker) which was the former capital of Bhutan and is home to many important buildings. On the way we stopped at a high mountain pass, where one can see a view of the Bhutanese Himalayas – at least that's what I was told, when we arrived all we could see was mist. Still, we will be back tomorrow, so fingers crossed for a view.

All Bhutanese states have their own fortress where the monks live and where local government is run. The Punakha fortress is the oldest and is generally regarded as the most beautiful in the counrty. The story goes that its architect dreamt the design of the building when his body was transported to heaven. There is something heavenly about the fortress for sure – it is at the meeting of two of the bluest rivers you have ever seen, and, considering it was built in the 17th century, it is an awesome feat of architecture.

From the fortress, we then trekked to a temple dedicated to Lama Kunley, the divine madman. He is a God of fertility amongst Buddhists., so most houses in the area have their outer walls adorned with enormous phallic decorations – very odd to western eyes!! I was approached by a young monk with a 12 inch long clay phallus which thankfully he just wanted to bless me with. Being in a foreign country, it is difficult to deal with their religious customs – on one hand, the locals often want to include you in their various blessings, but on the other you want to be respectful and not merely pay lip-service to their customs. Anyway, I accepted the phallus (so to speak) and the holy water blessings before we set off to another fortress – this one on top of a huge cliff which is supposed to look like a sleeping elephant, though I couldn't really see it. It was then back to my hotel: Samgay and Namgay, my guides, are huge fans of English football, so are really looking forward to tonight's matches – I've promised Samgay that I will send him some Chelsea memorabilia when I get back; he wasn't impressed by my offer of a Tranmere Rovers shirt.

Lots more driving tomorrow, as we try to fit as much of Bhutan in as possible in my 6 days in the Himalayan kingdom.