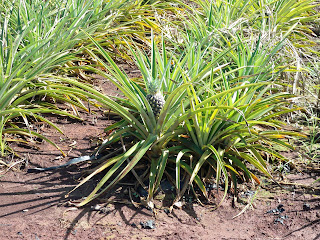 Today was museum day for me, on the island of Oahu. So I was up early and drove to the North of the Island for my first stop: the Dole Pineapple Plantation. The plantation was a bit of a disappointment to be honest, it was basically a garden that didn't come close to yesterday's botanical trip and field after field of pineapples (spot the pineapple, above). I took a couple of pictures and then went to the main attraction – the world's largest maze (as confirmed by the Guinness Book of Records, apparently). 20 minutes and 33 seconds later and I'd completed the course; very hot and quite a few holes in walls that frustrated maze-ors had clearly made; but really good fun.

The next place to visit was the largest museum on the Island, The Bishop Museum, which serves as the state of Hawaii's national museum. I managed to blag my way into the archives and met a fascinating guy – typical museum curator – who talked at length about some of the treasures of the museum. They included writings of early Hawaiian kings, original drawings from Captain Cook's voyages, and beautiful pa'u cloaks made from up to a million birds' feathers. The feathers were extremely rare - from a bird that has now died out – but it wasn't hunted to extinction, the Hawaiians would carefully catch the bird, pluck a couple of feathers and then let it go. It sadly succumbed a number of years ago due to loss of habitat.

I left Bishop Museum to find the third of my triumvirate, the Lucoral Museum in Waikiki, a small establishment that specialises in gemstones of all kinds. They have the world's largest sculpted piece of ruby quartz as well as many fossils. One family earlier in the year were walking through the museum and said: “we have loads of these in our back yard in Oklahoma” - sure enough, within a few weeks a box had arrived at the museum full of excellent fossil examples. It now has pride of place in its own cabinet.

So with much learned, I headed back to my hotel to write some postcards, and then an early night. It's a long long journey to Hong Kong in the morning – must get some beauty sleep.