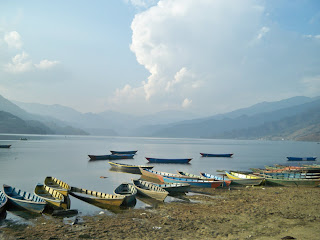 It was me who was annoying the neighbours this morning as my alarm went of at 6am for my bus to Pokhara. Pokhara is the third largest city in Nepal, but is certainly in the top two as far as tourism is concerned – it is the beginning of most Himalayan treks and is situated on the banks of a rather large and beautiful lake.

The bus journey was long and hot and all passengers were united in their annoyance with a French family on the front seats with a trés annoying child. It wasn't so much that the child was hyperactive and loud, but that he was being encouraged to scream by his mother and aunt. Still, such trifles can bring a group together and through the odd rolled-eyeball and raised-eyebrow I got talking to a few fellow-passengers, most notably an Alaskan who spends 3 months every year travelling and has just been mugged in Phnom Penh and an impressively bearded Canadian who has seen no fewer than two UFOs. 'Interesting' folk.

Anyway, it was an eight hour journey so was relatively late when I arrived in Pokhara. As we drove into the city it was just as crazy as Kathmandu had been, in fact it was even more so as the city's stadium was packed with people – a later google showed that this was likely the Maoists again, this time declaring another new autonomous state – and basically provoking the government more and more. There are nationwide strikes due on Monday when I fly out, but they don't really want to affect tourists, so hopefully it will be no problem. Anyway, by the time we arrived in the touristy area by the lake, there was an altogether better vibe: I'm not sure whether its because there is only one main street, as opposed to Kathmandu's maze, or maybe fewer taxis, but everyone seemed much less desperate to get wherever they were going.

One of the main attractions of Pokhara is its proximity to the Himalayas – I'm hoping to get some good shots – so I decided that I would head to the World Peace Stupa, a Buddhist monument on the top of one of the nearby hills, which is supposedly a great look-out point. The trip involves rowing across the lake then trekking up the hill, but when I got to the lake I was accosted by a tibetan lady who wanted me to buy some handicrafts. We got talking, and she advised me against the walk; apparently there was no way I would make it to the top before sundown and I should instead come back in the morning. I thanked her, bought a fairly tatty necklace and instead went for a walk along the lake shore. I will tackle the lake and the hill in the morning.
Posted by eggshaped at 09:13