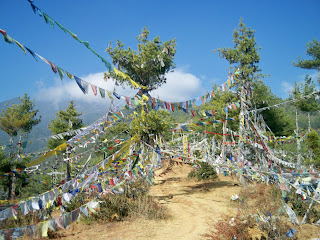 Today I played golf and snooker and watched the darts and a movie. But first I was taken to the hills around Thimphu for a view of the city.

Sadly it was fairly hazy this morning - apparently thanks to the sub-zero temperatures at night and the fairly warm daytime - it meant that there wasn't really much photography to be had, so instead I went for a walk in the hill, talking to my guide. He told me about the traditional courtship of night-hunting where a perspective couple would agree to meet up at the dead of night under the lame excuse of taking the girl's livestock for a walk in the woods. We also managed to photograph the Takin - it's an odd creature - the story goes that Drukpa Kunley, Bhutan's "Divine Madman" was once forced to perform a miracle. He asked to be brought a cooked cow and goat, ate them, and then began to reassemble the bones, putting the goat's head on the cow's skeleton. Then he sent it running on its way and it became the takin. There are many more (altogether less savoury) stories about Kunley - maybe I'll save them for another day - or I guess you could google them.

Anyway, the day before, I'd pointed out the golf course beside Thimphu's fortress, and so my guides organised a game. As a keen golfer it was a moment to remember, hacking around in the stunning Thimphu Valley> Though actually, once I'd got used to the odd bounces and fast "greens" (actually mostly covered in sand) I shot a decent score, so was happy.

From the golf course, we headed via the national library (home to the world's largest book - a tour guide to Bhutan) to the national stadium. Bhutan has three main sports: soccer, archery and (what was happening today) darts. This is no British darts though - the arrows are much more hefty, the tagets are a good 50 feet away, and it's a team game. In fact, the opposing team dances around the target trying to put you off as you throw. I am told that in inter-village matches, the girls from your opposing faction will yell at you as you throw: shouting that you have a big nose, or big ears, or will never find a wife. Anything to put you off. This is serious work, but very enjoyable for the spectator.

My driver, Namgay, had disappeared, so my guide Sangay and I walked a little while to a car-park style area to wait for him. It turned out that they were filming a Bhutanese movie there. There were a group of around half a dozen girls & half a dozen boys dancing in a bhangra style to some local music while many of the townsfolk gathered round in interest. We watched for a while while waiting for our lift, but it was nowhere to be seen. Thankfully Sangay knew one of the movie actors who gave us a lift back to where we'd last seen Namgay, and sure enough, there he was.

While I was burning up the golf course Sangay was bragging about his snooker skills. Well, I couldn't let this pass, so we agreed to head over to one of Bhutan's snooker halls for a match before they left for the day. I have to say that I think they let me win, but win I did, and so I finished the day not only entranced by the beauty of Bhutan, but also feeling like I was unbeatable at any sport. ^_^
Posted by eggshaped at 08:58