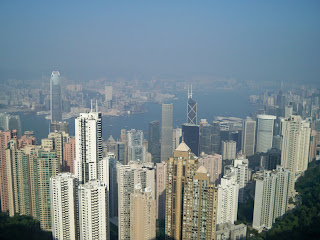 Hong Kong is an incredible contrast to Hawaii. Gone is the laid back atmosphere, the clean air and the empty beaches, and in their place are throngs of people, traffic everywhere and consumerism at every corner.

I am staying in Mong Kok. I didn't just choose the area because of it's funny sounding name; it was mostly thanks to the Guinness Book of Records claim that it is the most densely populated place in the world. And boy, is it busy - there are blocks of flats everywhere and where there aren't flats there are honking cars and neon signs aplenty.

With only three days in Hong Kong, I was determined to make the most of today, so decided to aim for the central and museum districts. But most important things first, I grabbed a coffee and headed for the nearest park. The park was extremely busy for so early in the morning, and it soon became clear why. The East Asian Games (a kind of mini Olympics) are taking place in Hong Kong from today for the next week - and so the park (which is home to the city's largest swimming pool) was all decked out for the event. Tomorrow I think I will try to catch some of the action.

Next it was to the History Museum of Hong Kong. It's great. If you're ever in town, you must go. Full of interesting facts and very very visual; they've clearly decided to make the place as spectacular to the eye as possible. The story of Hong Kong goes right from the formation of the area's rocks to consumerism of the 1980s and 90s, and doesn't miss a trick. You end up leaving believing that there could be nothing else to know about the city. Before I left I spoke to one of the managers, and will hopefully return on Monday to speak with some of the curators.

I then walked down to Hong Kong harbour to take some footage (it was very Hazy thanks to the pollution and lack of wind) and then took the ferry over to the central district to take the funicuar railway to Victoria's peak to see the supposedly incredible views over the city. After the walk up Diamond Head in Honolulu, I must say this was a little bit of a disappointment. Not due to the views, which were stunning, but because when you reach the top it is basically just a huge shopping mall. The locals have seen the popularity of the peak and so have exploited it to its full extent. Maybe I should have expected it - this is Hong Kong after all.

A trip to the small horse-racing museum at Happy Valley followed before I got back to the hostel. Tonight I am meeting a friend of a friend who has lived in the city for years; hopefully to gain some idea of how to spend my final two days.