As I was on my way out of the hotel last night I was collared by the manager. On my arrival I had asked him to book a bus back to Kathmandu for Sunday as I fly back to the UK on Monday night; this would be impossible, he explained, the Maoist strikes are to begin on Sunday morning and will last a minimum of three days: my only choices are to get to Kathmandu on Saturday morning or change my flights which could mean me getting back to the UK after Christmas. I think I would be disowned by my family if I had chosen option b, so I reluctantly agreed that I would be up for the 7am journey. I must've been visibly disappointed, as the manager offered me an olive branch; the sun rises over the Himalayas at around 6am every morning – did I want to be taken to the look-out point on top of a local mountain to see the view? I had struggled to get much in the way of Himalayan footage over the last few weeks and so this morning I found myself sat on the back of a motorbike at 5am riding through the deserted streets of Pokhara. 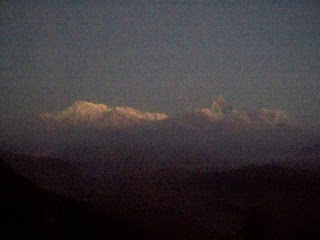 I have always thought motor- biking to be a particularly moronic form of transport: now I can add suicidal to my list of adjectives. As we sped past small fires set on the side of the road and zombie-like people trudging to god knows where, I thought to myself how well I'd done to avoid any serious injury on this trip – thus far. Things didn't get much better when we went off the highway and onto the winding road up the side of the mountain. By the time we nearly ran over an old man (later on when I spoke to the biker about it he laughed heartily and admitted that it was all his fault, I don't think the old man was laughing too much) my hands were fairly glued to the grip-points that I had chosen on the bike.

Anyway, somehow we got there, and the view was stunning. To begin with you can just about see the black outline of the Annapurna range against the slightly-less black sky, but slowly and surely it reveals itself in all its majesty. Firstly a white outline, then a golden shine as the sun finally hits the mountains followed by the familiar silver peaks. The only disappointments were the dozens upon dozens of japanese tourists who were stood behind me, snapping away, and that I couldn't stay until the really spectacular colour changes had fully taken place. We stood on the peak as late as we dared – knowing that I had to be at the bus park by 7.30 – and then flew back down the mountain – this time even more recklessly as my companion looked to ensure that I made the last bus home. 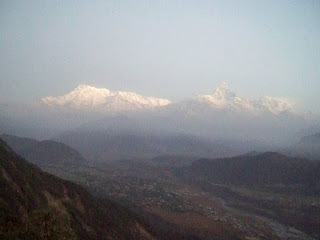 I dis- embarked back at the hotel and my wobbly legs somehow carried me back to the room to pick up my already-packed bag. The bag is getting heavier and heavier as I discard clothes in favour of books and souvenirs, and the “short-cut” from the hotel to the bus park took us over more bumps and potholes then my body could really take – how my back wasn't put out by the rucksack's reaction to the many jolts I have no idea, but somehow we arrived in one piece and with no more than a minute to spare.

I was jostled to the final seat on the bus. There was no annoying French child this time, thank goodness, all I had to put up with was the smell of lager and body odour from the homeless-looking man on my left, the smell of rotten fruit being eaten by a ludicrously-dressed hippy to my right, an indian girl yelling into her mobile phone to my front, and a man repeatedly singing “are you going to Scarborough Fair” to my rear. (Not actually singing it “to my rear” you understand – I think he was just singing to himself).

The journey was long but uneventful and I arrived at the hostel in the late afternoon. It had already been a long day and everything was beginning to close, so I decided to retire to my hotel room. Dinner and premiership football, and it was time for bed. I don't know that I'll be able to do anything tomorrow; some say that the whole country stops for the strikes, but it's my final full day so will blog nonetheless.
Posted by eggshaped at 01:34