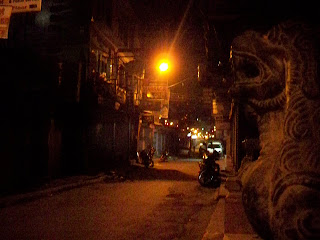 My greatest shame on this trip has been my frequenting of numerous Starbucks, McDonald's-es and Burger Kings. It's not that I particularly like this kind of food (except for the coffee at Starbucks) but sometimes when you're looking for somewhere to get food or drink in an unfamiliar town - especially when you're on your own and so not looking for a full restaurant meal - the familiar brands tend to catch your eye. Perhaps more important is the fact that these places generally have free wi-fi. Anyway, enough attempts to justify myself, what I'm trying to say is that there was little surprise this morning when I headed straight for a coffee at Seattle's finest before my visit to the History Museum of Hong Kong.

The weather in Hong Kong had been glorious for the last few days, but had turned by this morning. It was very overcast, and perhaps not t-shirt weather, but I'm from the north so there was no turning back for a coat - a stubborn decision regretted 15 minutes later as the heavens opened! Maybe it was my damp, slightly bedraggled, look, but the museum was not nearly as helpful as it had been a few days earlier: my supposed meeting with the curators turned out to be a case of being left in the resource library along with an administrator who had little idea about anything. However, before he kicked me out so he could go for his lunch, I did get to meet one of the managers who gave me a few pointers on their intranet and showed me their image library, so maybe it wasn't such a waste of time after all.

I left the museum and took the bus to the airport to check-in for my 6 hour flight to Kathmandu (for the final leg of my trip – H-for-Himalayas). The plane, for some reason, stopped in Bangladesh on the way. As far as I was concerned we weren't supposed to be in Dhaka, but actually I felt it was a bit of a shame that I didn't have time to get out and look around as within a couple of hours we were back in the air and on the way to Nepal.

I arrived in the airport and took a taxi to my hostel. The arrival lounge was a little bit crazy again with many many taxi-drivers, tour guides and hotel owners looking to capture a tourist, but it was an officially sanctioned cab that took me through the streets to my hostel. Kathmandu gives the impression of a very poor city: you can see many kids living on the streets and untreated piles of rubbish, but it is also a vibrant capital with many people driving, cycling or walking with a purpose – even at midnight, which was the time that I arrived.

I dumped my rucksack and decided to go for a quick walk around the hotel: it was rather intimidating (as it often is, no matter which city you arrive in) with the tight roads, the hawkers on the street and the lack of streetlights (it was the early hours of the morning after all). There's one thing for sure: there won't be many Starbucks, McDonalds or Burger King escapes for the next couple of weeks!