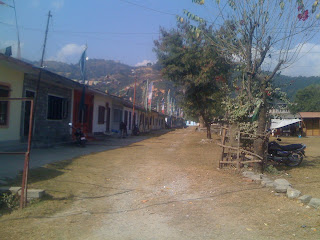 Last night I had my first full night's sleep since Hawaii – it's fairly unimportant as far as the trip in concerned, but I just felt that I had to share it. It has been a good 10 days since I crossed any timezones, so maybe I'm finally getting over the jetlag (a couple of days before the 22 hour flight back).

Anyway, after my meeting with the Tibetan lady yesterday, it was a trip to the World Peace Stupa this morning to see if my visit might somehow cause all wars to cease. I ambled down to the lake's edge where the Stupa looms impressively - at the top of a huge hill on the opposite side. The first problem is how to cross the lake, but before I could get to the boats lined up on the shore I was stopped by Michelle, an Irish molecular biologist who quit Ireland to volunteer around India when the economy began to nose-dive. She was also heading up to the site. Did I want to share a boat over? Perfect. And so we paid our 300 Rupees and were paddled over to the opposite jetty.

It was great to have a bit of company on the arduous trek up the mountain (actually it was little more than a hill, but it was a steep hill, ok!?) and after around 45 minutes we reached the top where the impressive white building adorned with a large gold buddha surveys a 360 degree view over the Pokhara Valley and then over to the Himalayas. I don't know what I've done to upset the cloud gods on this journey but they have stubbornly covered the mountains every time I've come to take a shot. Again they were all over the peaks and there was very little footage to be had. Still, I walked around the Stupa a few times, made my wish for world peace and we set off back down the mountain in the opposite direction this time, to find the nearby Devis Falls and the living proof that we're a long way from world peace: the Tibetan Refugee Camp.

The Tibetan Camp (above) was actually a bit more plush than you might imagine; they have been there for quite some time – fleeing their country 50 years ago; after the Chinese invasion – and now many of the people survive by making handicrafts and selling them to tourists. There is also a school there and a temple, which again, I walked around, turning the prayer wheels as I went. Unfortunately you had to walk under a ladder to get to and from the temple; so perhaps all my good luck was cancelled out! The Devis Falls, which are named after a woman called Mrs Davies who was washed away by them a couple of decades ago while she sat in a nearby pool bathing, were a little disappointing – the adverts showed an incredible gush of water, but these were clearly taken in the monsoon season as today there was little more than a trickle.

We were now a good few miles from the hotel area, and under normal circumstances I would have walked; but I had a travelling companion for the day and so before I could say anything , Michelle had jumped on one of the local buses and so I had little choice but to follow. And I'm so glad I did. The tiny vehicle, not much larger than a minibus, bumped and bounced through the streets picking up twice as many people as you'd think it could physically hold with all the tumult you'd expect from subcontinental public transport. Absolutely brilliant experience. So much fun that it was only once I'd disembarked that I noticed my pants were wet through – my bottle of water had sprung a leak in my bag. Drat. And while I was adjusting my trousers I was accosted by the Tibetan Lady who had given me such good stupa advice 24 hours earlier. With little choice but to buy some handicrafts from her, I purchased a Tibetan bracelet made from Yak Bones and headed back to my hotel.

After heading out to watch the cricket following the daily 6pm power cut (some bars have their own generators) I returned back to find the hotel owners enjoying a late-night nepalese whiskey. They asked me to join them; when you get a chance to hang out with cool people like I have today it makes you realise what travelling is all about. Tomorrow I'll have to do much more travelling than I'd hoped, but more of that in the next installment....