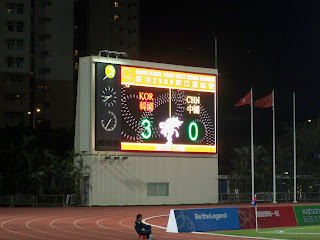 Today I decided to take a day off from work. I've been a little under the weather recently, so thought I needed a bit of a break. Still, I'm in Hong Kong, so I had to do something; so my plan was to try to catch some of the East Asian Games that are currently taking part in the city.

I attempted to have a lie-in but sadly I don't think 5am counts as such, so I was out of the hostel nice and early. Yesterday I was stopped on no fewer than five occasions by well-dressed men clearly trying to sell me something - I'm fairly well versed in dealing with hawkers now, so just walked on - but my curiosity was piqued, and so, determined to find out what it was they were trying to sell (I was guessing a haircut) I traced my footsteps from the previous day. It turns out they were all tailors trying to sell me a suit. Either they thought I was someone who regulary wears suits, or they thought I drastically needed a change of clothes (I kinda hope it was the latter). I politely declined anyway, and it was still nice and early when I arrived at the Kowloon Park to attempt to watch the swimming and diving.

The volunteer who greeted me barely spoke better English than I spoke Cantonese, but I soon realised that there were no tickets available for the day. I asked if there were any other events nearby and he sent me in the direction of the cricket. A nice bit of Twenty/20 sounded good, so I made my way to the stadium only to find that he'd mistaken the English word "Cricket" for "Hockey" - and even the hockey was sold out. Ho hum. Back to the drawing board.

After talking to a much more useful volunteer at the hockey venue, I found out that it was a music store that dealt with the event's tickets, and so, with headphones in ears, I lolloped over to the shop. I sometimes wonder if people notice the change in my gait when the theme to Garden Force comes up on my ipod.

There were tickets to the evening's football match between South Korea and China available and so I snapped them up; the game was great. 3-0 to the Koreans. While it may sound quite one-sided, it was far from it, and the atmosphere was great with thousands of Chinese fans outnumbering the Koreans by, I would guess, 200/1. Still, at the final whistle it was the few dozen fans from the peninsula who were making all the noise.

So it's my final day in Hong Kong tomorrow - over all too soon - though I don't really feel that I've missed out on too much. Fly to Kathmandu in the evening for the final leg of my tour - H for Himalayas.