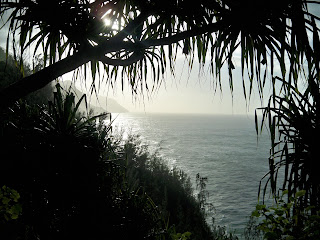 There are thousands and thousands of feral chickens on Kaua'i. They have no natural predators. The story goes that the only crate of mongooses to land on the island was dropped into the ocean after the unloading sailor was bitten on the finger. (as an aside, if mongooses actually *did* get on the island they could be an ecological nightmare; once someone thought they spotted one and the government paid an expert for three years to capture it - three years later the position was stopped, no mongoose had been found). The chickens though, they certainly are conspicuous; they are loud, especially, it seems, at six in the morning...

The island has only one main road, it skirts the coast of the island but only gets as far as the giant cliffs on the north side, so one cannot drive all the way round. Yesterday I drove clockwise to the end of the road, and today it was my plan to drive anti-clockwise to the other dead-end, taking in the sights as I drove.

The first stop was the Kilauea lighthouse, the most northerly part of the Hawaiian island chain. It is famous for having the largest lens of its kind in the world (with the brightness of 2.5 million candles), for its many nesting birds (frigates and boobies especially) and for its position alongside a refuge for humpback whales. It is the very start of whale season at the moment, they're just beginning to arrive. Whales don't feed in Hawaiian waters, instead relying on blubber stored in the North Pacific: they are here to breed and calf. Did I see one? Well, I saw a dark shadow and a large splash, and the group beside me certainly thought it was a whale - if I'm honest, I think it may have been a large wave.

So I continued the drive and stopped at a number of beaches; these northern areas are where the TV series "Lost" is filmed. Having not seen it much, I couldn't recognise specific places from the show, but I certainly could see how the north of Kauai could be used to portray a desert island. I continued to the very end of the highway, at which there is a trailhead leading to the Island's most inaccessible areas, and got a good mile or so up the steep steep trail before I decided it was time to turn back. I certainly got some decent pictures, despite the trade winds battering the cliffs.

So all in all it was a fairly successful day, certainly as far as photography was concerned. Tomorrow I'll hopefully be learning again, as I will be shown around the Botanical Gardens by one of the Island's experts. It's around 11pm here and thankfully there are no crowing chickens; they have evidently been scared away by the inexplicable late-night roadworks.